Modern life is inundated with complex decisions, from purchasing a car and deciding where to go on vacation to making decisions about physicians and medical treatments. When making such decisions, people sometimes hold the various factors in memory and deliberate over them in order to make the best possible choice. However, at other times people focus on their feelings regarding the options and ultimately “go with their gut.” 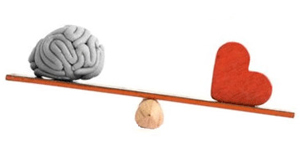 In order to address these questions, we have been investigating the role of emotion and cognition in decision making. For instance, we have examined the efficacy of different decision strategies in younger and older adults. In one study, we found that decision interventions that involve holding the details of decisions in working memory improved the decision quality of younger adults but impaired that of older adults. In stark contrast, when participants were encouraged to hold in mind their emotional reactions to decision options and base their decisions on their feelings, the age differences disappeared and older adults made decisions of equally high quality compared to those of younger adults (Mikels, Loeckenhoff, Maglio, Goldstein, Garber, & Carstensen, 2010). In follow-up studies, we have also demonstrated that under conditions of exceptionally high complexity, the decision making of younger adults greatly benefits from employing emotion-focused versus detail-focused approaches (Mikels, Maglio, Reed, & Kaplowitz, 2011). Thus, these findings underscore the benefits of emotion for improving complex decision making across the adult life span. But when might “going with your gut” be harmful?

We recently found that relying on emotion and intuition can lead older adults to make poorer decisions (Mikels, Cheung, Cone, & Gilovich, 2013). Specifically, older adults made many more non-optimal choices relative to their younger counterparts on a gambling task in which intuition guides people toward a choice that feels better versus a more optimal choice that actually has a greater probability for winning. Moreover, this age difference was not explained by age-related declines in deliberative abilities but by the greater positivity of the older adults.